The brand „Mahotella Queens“ is still very alive and kicking, 50 years after their first triumphs. Legendary band founder Hilda Tloubatla recently invited 2 young singers to join and the new line up was highly celebrated in 2017 at the European festivals. The Queens are now representing more than just one generation and bring a live show that is filled with dance, joy and energy and more vibrant than ever before. 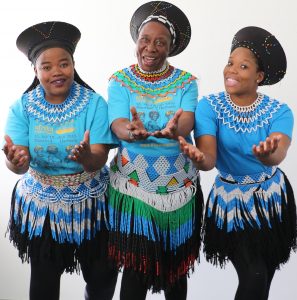 BIOGRAPHICAL NOTES
The Mahotella Queens originated in 1964 as the brainchild and creation of Rupert Bopape, a music producer and talent scout at the Mavuthela Music Company, the Gallo Record Company’s division dedicated to “black” music at the time. The Queens were the record company’s resident girl group, and were often led by the deep, basso profundo male vocals of Mahlatini and backed by the Makgona Tsohle Band, which included West Nkosi on alto saxophone and Marks Mankwane on lead guitar. This dynamic instrumental and vocal combination went on to chalk up several hit records during the 1960s.
In the 1970s, the Queens experienced a rocky patch due to contractual disputes, but remained active and productive, albeit with a fluid line-up. Their international breakthrough came in 1987, in the wake of the success of Paul Simon’s seminal Graceland album. Interest in “world” music exploded and the international community sat up and started taking serious notice of South African indigenous sounds.

The Queens regrouped with three of the outfit’s original members – Hilda Tloubatla, Nobesuthu Mbadu and Mildred Mangxola – and, as Mahlatini and the Mahotella Queens, they took South Africa and the world by storm with their mbaqanga-laced musical stylings and stirring harmonies. They became renowned as South Africa’s first mbaqanga “supergroup”.

Sadly, just as their decades of hard work were starting to pay off, Makgona Tsohle Band members Mankwane and Nkosi, and subsequently Mahlatini, passed away in quick succession during the late 1990s.
Devastated by these tragic setbacks, the Queens briefly considered retiring for good – before resolving to keep their late collaborators’ legacy and spirit alive by carrying their artistic torch into the 21st century. True to their pledge, they have continued writing and arranging music, recording and touring, wowing fans at home and around the world with their energetic performances and placing mbaqanga music firmly on the global map. The Mahotella Queens are firmly entrenched as an integral part of the South African music landscape, and are true ambassadors for traditional music – keeping it alive, vibrant and relevant for modern audiences.

Over the years they have successfully navigated the fickle and ever-changing music industry with resilience and inventiveness. Always willing to experiment, the Queens continually add new elements to their signature sound, further enhancing their appeal. Now, as the Mahotella Queens commemorate 50 years with a new recruit adding a fresh injection of youthful vigour, this trio remains as committed to their cultural roots as ever – while continuing to chart brave and exciting new musical territory.