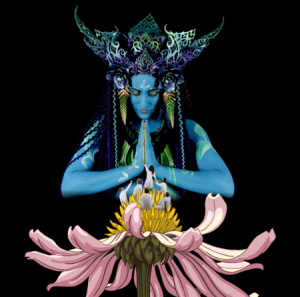 Chronicling the sounds and stories of voices at the margins, Growing Upward is global music group Rupa & the April Fishes bold new album mapping the experiences of physician, social activist and composer Rupa over five years as she became a mother and accompanied indigenous groups fighting the oil industry at Standing Rock and families demanding justice for police violence while delving into dialogues with artists, climate activists, indigenous healers, grandmothers, farmers and cultural workers around the world. Moving between deeply personal and political, the songs sing to the tender power of love and the force of hope that lies within transformation. In a world heaving with climate catastrophe and energies that threaten to pull us apart at the exact moment when we must come together, Growing Upward is brimming with optimism and incisive critique of those systems of domination that threaten human existence around the world. With compositions inspired by the frontlines of social movements and dialogues with the late Gil Scott Heron, composer Rupa Marya turns her experience as a physician, social thinker, mother and activist into a sound that is both wide-reaching and intimate.

Collaborating with seasoned bandmates who have toured together in 29 countries and released 4 prior critically-acclaimed albums, with radical performance artist Guillermo Gomez Peña in a Declaration of Human Rights, with indigenous artists from many territories across Turtle Island, with regenerative farmers working to heal the earth, with special musical guests Todd Sickafoose (bass), Marco Benevento (organ), Andrew Borger (drums), Karen Stackpole (gongs) and Damion Gallegos (production, The Coup), and with longtime artistic collaborator and muralist Mona Caron, the album will be released in a plastic-free form—as a series of seed packets—inviting listeners to engage more deeply by planting their own medicines. This collection of songs invites us back into the circle, back into relationship with the plants that heal us, the earth that sustains us, the community that enlivens us and the music that keeps our perspectives elevated in times of joy and in times of darkness.

Rupa is a composer, songwriter, singer, guitarist and leader of the band Rupa & the April Fishes. She grew up in between the San Francisco Bay Area, Southern France and Northern India and her compositions span four languages and countless musical idioms, from French chanson to Colombian cumbia, from American folk to Indian ghazal. Through her band, she has released three studio albums of original music to worldwide acclaim, has toured extensively on 3 continents and recently released one solo project of intimate string quartets, which were arranged in collaboration with composer Mark Orton. She has been the recipient of a major grant by the San Francisco Arts Commission, for the composing and directing a mixed-media performance piece ¡Catapulta! which recognizes and celebrates the struggles of migrants around the world. A master of intercultural musical exchange, Rupa is currently working with indigenous Pacific Northwest women in British Colombia on a musical dialogue about the forces of nature. Her music has been used by Giorgio Armani without her permission, has appeared in NBC’s Parenthood series and has been used with her enthusiastic support to further the work of performance artists, climate activists and food sovereignty activists around the world. The LA Times calls her sound „ecstatic and powerfully evocative.“

TOUR PERIOD
Summer 2021 and on request