RANKY TANKY have achieved many firsts for South Carolina’s West African-rooted Gullah community since their formation, earning yet another milestone at the 2019 GRAMMY Awards by taking home the Best Regional Roots Album prize for their sophomore release, Good Time. The album, which also hit No. 1 on Billboard’s Contemporary Jazz Chart, combines songs carried down through generations in the Sea Islands of the Southeastern United States with the band’s own original compositions in the Gullah tradition. In Ranky Tanky’s hands, this style of music has been described as “soulful honey to the ears” (NPR) while being covered by the New York Times, NPR’s Fresh Air and The TODAY Show, who had the band on for a performance. 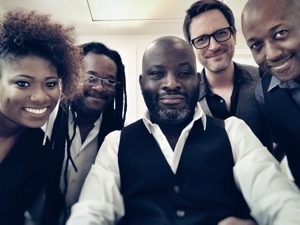 Ranky Tanky (a Gullah phrase for “get funky”) are five lifelong friends from Charleston, South Carolina who have established themselves as passionate global ambassadors for their local culture and community, helping to faithfully preserve the traditions originated by African Americans in the coastal South during slavery that are kept alive through the present day. The band have been featured on NPR’s Fresh Air, The Today Show, PBS Newshour and The Late Show with Stephen Colbert #playathome. Ranky Tanky were honored to be featured artists in President Biden’s inauguration event, We The People. They were the subjects of a 10-page profile in Oxford American’s South Carolina Music Issue and were named 2020 Artist of The Year by the Charleston City Paper.

Kevin Hamilton (Bass)
is a celebrated artist in Charleston’s vibrant jazz scene. He has performed internationally with diverse ensembles such as The Charleston Jazz Orchestra, Houston Person, Gregory Hines, and Rene Marie. Kevin Hamilton joined the U.S. Dept. of State’s OneBeat program in 2012 and holds a degree in music theory and composition from the College of Charleston.

Quiana Parler (Vocalist)
has one of the most sought after voices in the South Carolina Low-Country and has graced some of the most prestigious stages in the nation. Through a top placement on the hit TV show “American Idol,” she was was discovered by Clay Aiken, with whom she toured nationally for seven years. Quiana has performed with Kelly Clarkson, Ruben Studdard, and Miranda Lambert, worked with producers David Foster, Adam Anders, Phil Ramone and Walter Afanasieff and appeared on national television shows The View, Good Morning America, and Jimmy Kimmel Live among others. Currently based in Charleston, SC she performs locally and nationally with her 10 piece party band, “Quiana Parler & Shiny Disco Ball Band.”
www.quianaparler.com

Clay Ross (Guitar, Vocals)
has established himself as an in-demand sideman and innovative bandleader on the international music scene, winning multiple grants through the U.S. State Department and touring worldwide as a Cultural Ambassador. Now signed to the Motema Music label, he currently tours worldwide, leading his NYC based band Matuto. “Mr. Ross is a very deft guitarist with a rich vocabulary of folk, blues, and jazz at his disposal…” – Wall Street Journal
www.clayross.com

Charlton Singleton (Trumpet, Vocals)
is the Artistic Director and Conductor of the Charleston Jazz Orchestra; a 20 piece jazz ensemble of some of the finest professional musicians in the Southeast and the resident big band in Charleston, SC. He has toured across Europe and throughout the United States and has also shared the stage with and/or worked with some of most talented entertainers in the world. Outside of music and entertainment, he is a devoted husband and proud father of two.
www.charltonsingleton.com

Quentin E. Baxter (Drums)
is a Grammy-nominated musician/producer currently on tour with Freddy Cole and Rene Marie. A prominent figure in the jazz community of his native Charleston, he is the Co-Principal of Charleston Jazz Initiative, a founding board member of Jazz artists of Charleston, and an Adjunct Professor of Jazz Studies at the College of Charleston.
www.baxtermusic.com

“Ranky Tanky, from Charleston, S.C., sings old Gullah songs — some of them sly moral lessons — in arrangements that connect their beat to a New Orleans lilt.” – New York Times 1/10/17

“The biggest surprise of the evening, though, came not from Asia nor Africa. It came from South Carolina, where a quintet called Ranky Tanky has updated the Gullah tradition of the Georgia/Carolina sea islands with gospel vocals, jazz trumpet solos and an R&B rhythm section. Isolated on those islands, slaves developed their own language and music that remained more African than anything on the mainland, creating a culture like no other.

Ranky Tanky, which takes its name for the Gullah phrase for “work it” or “get down,” transforms the hymns, party anthems and children’s songs of the islands into infectiously rocking numbers. Quiana Parler is a big-voiced, joyful singer; Charlton Singleton is a marvelous trumpeter, and Clay Ross stitches everything together with his introductions and unusual rhythm-guitar solos.

Non excl. territory:
Europe in cooperation with The Kurland Agency