After the great success of his first LP, Gili has just released his new EP “Made in Amharica”. Gili has been touring around Europe and performing on the some of the biggest stages in Europe in 2019 i.e.: WOMAD UK and Sziget Festival. Gili Yalo (Ethiopia/Israel) combines his Ethiopian roots with Soul, Funk, Psychedelic and Jazz music. Gili, who has collaborated with top music producers Beno Hendler and Uri Kinrot (Boom Pam), incorporates sounds & rhythms from traditional Ethiopian music into a contemporary music production. The result is an exceptional, rich, vivid melody accompanied by Gili’s unique voice with lyrics in both English and Amharic. The songs on his 2nd album reflect the cooperation between Gili Yalo and Dallas based musicians in a high-end vintage equipped recording studios of Niles City Sound Studio in Fort Worth’s South Main with it’s Grammy nominated music producer team Josh Block, Austin Jenkins & Chris Vivion. The songs reconnect again with the music of his parents and childhood – a homage to the heyday of jazz in Ethiopia. 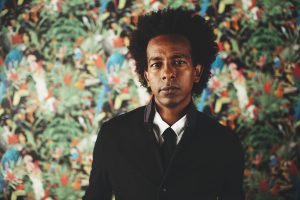 The music made by Gili Yalo embodies his own personal story, which inspired the rhythm and flow of the whole project. And what a story he has to tell: Operation Moses was the covert evacuation of Ethiopian Jews from Sudan during a famine in 1984. These Ethiopian Jews fled from their native land on foot to refugee camps in Sudan. Together with his family, Gili Yalo made this perilous trip, walked through the desert towards the “Promised Land” and sang to his beloved ones. In the course of this exhausting and emotional journey, the music encouraged Gili and his family to keep on moving.

An entrancing rhythmic motion is apparent when listening to Gili’s music, from the groove, beat and flow, and up to the lyrics, concept and style of the project. Today Gili Yalo’s music gives a new meaning to traditional Ethiopian music. The expression of his story through an advanced music production represents his own personal triumph.

If you disable this cookie, we will not be able to save your preferences. This means that every time you visit this website you will need to enable or disable cookies again.